Well, I am finally getting around to posting about my Valentine's Day decor... I normally don't decorate too much for V-Day, but this year, there were too many cute projects and ideas out there for me *not* to.

The first thing I had seen that I just LOVED was from Simple As That - a banner created with book pages, hearts, and buttons. Here's my version:

I started with the book pages, cut to about 4x6, then cut the notch out of the bottom. I also used my favorite ink - Tim Holtz "Vintage Photo" distress ink and inked all of the edges. I had bought some heart-shaped doilies from Michael's that I also inked with a pink chalk ink from SEI. I also printed/cut some shapes from Silhouette - the heart love circles and of course, inked the edges of those, also. I took some of my Pick Your Plum resign flowers, and added those to the middle of each circle. I couldn't resist also adding a little bling, as well, so I dug out some pink circles and some butterfly and dragonfly bling I had in my stash! Then, I needed to assemble them, so I used my Baker's Twine (also from Pick Your Plum) and folded the tops over the twine, and stapled them down. I had also found these adorable mini closepins from Michael's and added those after I hung my banner.

Here's the closeups of each one: 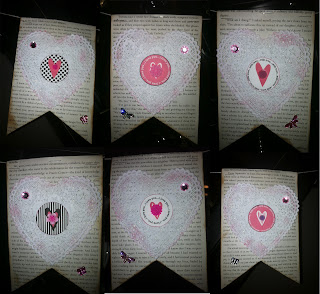 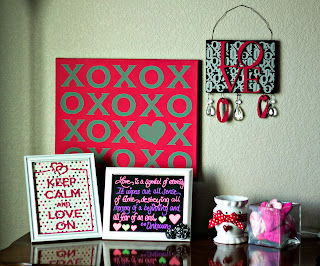 I'll describe these from left ... to right... starting with the "Keep Calm and Love On" - this was a GroopDealz Vinyl that I just had to have. They had it in a white frame on glass, but mine just didn't want to stay together, so I put the polka dot paper in the frame with it.

The large XO canvas on the wall came from this idea - I used a larger font, but followed her instructions on painting over the vinyl letters and then removing them. instead of leaving them white, though, I painted (very carefully!) over the white with gray. Don't look too closely!!

The chalkboard is one I made for Christmas that I'm swapping out quotes for each holiday. 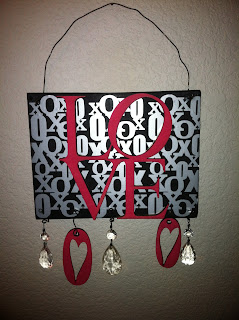 The "love" sign is my favorite!! Another Pick Your Plum deal - they had the signs on one deal and the LOVE woodcut on another. So, let me describe how I did this one - Shannon actually had a larger board that fit the LOVE woodcut perfectly, so I snagged it from her. Then I painted that board with chalkboard paint, and measured the size for vinyl. Using my Silhouette, I cut the silver vinyl from the hugs kisses border which I just duplicated a couple of times to fit like I wanted it to. The cordless drill punched 2 holes at the top for the wire, and 5 along the bottom. Shannon and I had gone to this amazing outdoor bazaar a few months back, so I picked up the chandelier glass from that and added it to the bottom.

The warmer is the February Scentsy (LOVE IT!), and the hearts in the jar were an idea from this site. I cut the hearts from cardboard, and then I just wrapped them while watching TV over a couple of evenings.

While I was working on all of these projects... I also had an attack of printables...

Left to right again - But the Greatest of these is LOVE printable, the other LOVE more and LOVE printables came from Sprik Space - but what I did was color them to match the first one using Photoshop, and *then* I printed them so they would all match.

The Kiss wood / glitter stand came from Walgreens and the sequinned heart in the back came from Michael's. The small vase came from my mom, so I have no idea where she got it! :)